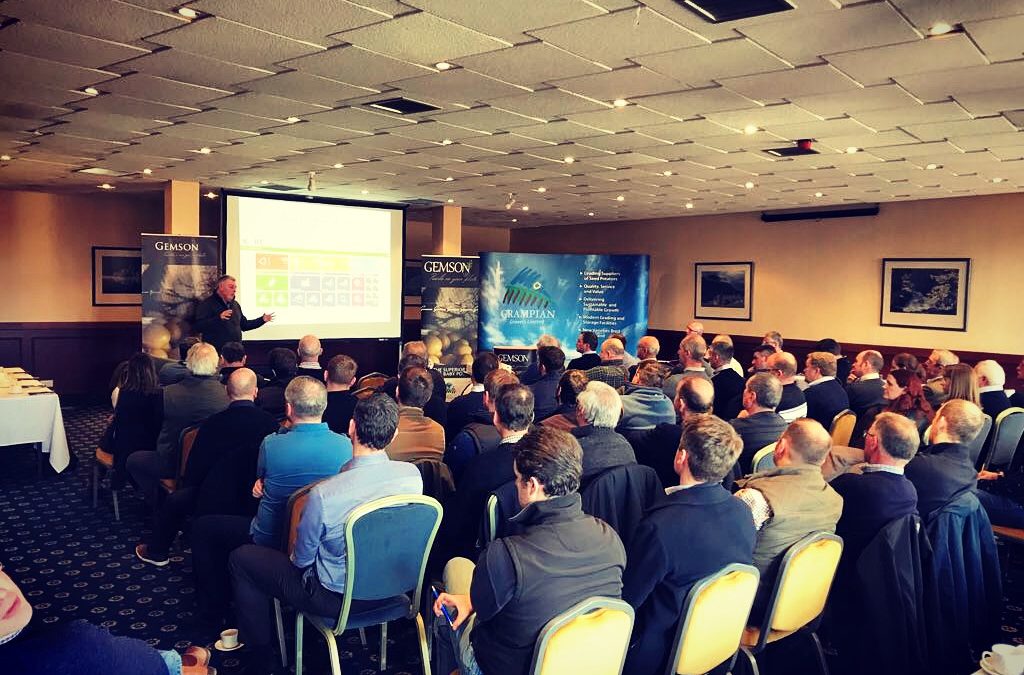 65 were in attendance with a range of growers and customers in the audience.

Potato Manager David Murdie started proceedings and introductions and announced the 4 new members of staff that had been enrolled since the last meeting. These are David Scott, Nici Smith, Claire Dyce and Jillian Lowe.

The first talk kicked off with Jim Wilson from Soil Essentials delivering a informative speech with where we are now in satellite imagery regarding in field and across field sensing. The advances were monumental with satellites focusing as far as 30cm from the ground. One key feature of Jim’s talk was the Blight risk model called BlightSense. The model is a field based blight airborne spore detector which aims to forecast in field blight risk. It does so using temperature and humidity which then helps analyses where the high risk areas are to then place the spore detectors. Another impressive app from Soil Essentials was a Crop Canopy Measurement app. This app can count and identify the % of canopy cover in a crop of potatoes. The programme uses drones to take the imagery and the results allow the user to compare and measure plant growth over time. A useful tool which will allow growers to identify which parts of the field are dying off quicker to help assist with spraying regarding what area of the field to target.

Following on from Jim was Kim Davie who is a Potato Nematologist at SASA. Kim’s presentation focussed on PCN sampling, legislation, Scottish outlook and management options. Kim explained that the sampling procedure for PCN dramatically changed in 2010 with the volume of soil being tested increasing. This change then saw that the area testing positive for PCN increased by over 100%. In Scotland, 13% of potato land is now recorded as infested for PCN which is a major worry for Scottish seed growers as Angus was listed as one of the top counties infested. Resistant and tolerant varieties, rotation, groundkeeper control, nematicides, biofumigants, trap crops, biosecurity and knowledge were the main management factors that Kim listed to help control and stop the spread of PCN.

A delicious steak pie and Gemson tattie lunch was served where networking began.

After lunch, Darren Mackie from Spearhead Potatoes took to the floor. Darren’s talk focussed on the processing supply chain which Spearhead Potatoes are leaders in the the industry for. Spearhead grew over 7,500 ha of potatoes and vegetables last year in the UK. In terms of potatoes, Spearhead grow around 336 ha of crisping varieties, 402 ha of seed and 1,200 ha of table salads as well as producing 1.2 million mini tubers. Darren went on to explain that Spearhead produce 100,000 tonnes of processing potatoes with 17,000 tonnes of this being own production, storage and washing and the remaining 83,000 tonnes were from 30 third party growers. They provide an all year sound supply of washed potatoes as well as having excellent on farm lab facilities. Being members of the Variety Innovator Group, Spearhead have a firm list of agreed objectives that they want to achieve through varietal development with fry quality and dry matter being the key requirements for success.

Finishing off the day was Dr Stuart Wale who needed to introduction to the audience. Stuart started off his presentation in the usual manner with a light hearted joke and then proceeded to talk about the 3 B’s – Bloom, Black dot and Blight in regards to Gemson. Stuart explained that the length of time the potatoes were left in the field for affects the level of bloom. The 2017 season proved difficult lifting conditions where some crops were left far longer in the ground than they should. Black Dot is another problem disease in potatoes and can cause major issues for the washing and pre pack markets. Stuart commented that Black Dot control can be managed with longer rotations as well as a control on groundkeepers. In terms of blight, Stuart recommended a new blight spray called Zorvec which has showed promising results to stop the spread and prevent late blight. The spray can be used in a 10 day cycle and still offer full protection to the canopy.

Grampian Growers would like to thank the aforementioned speakers for providing 4 brilliant talks which were engaging and topical. A big thanks also to all who attended, we look forward to seeing you all next year.