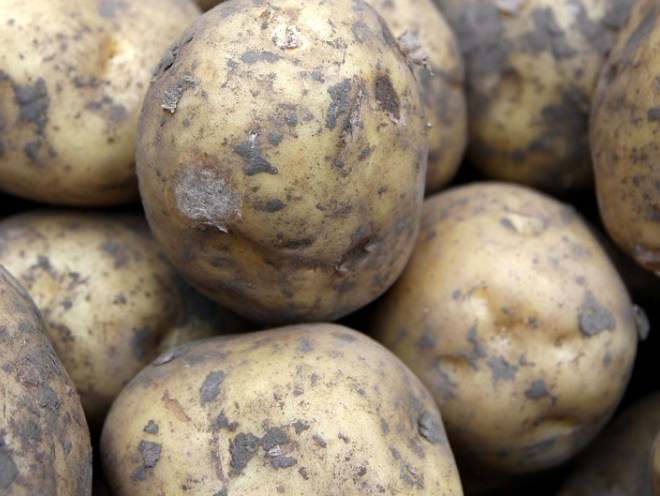 Back in 2012 the company invested heavily in new grading equipment and at the same time unveiled a potato breeding initiative in partnership with English packers E Park and Sons and Andrew Skea Organics based at Auchterhouse near Dundee.

Known as the GPS partnership the consortium’s plan was to fund breeding work at the James Hutton Institute (JHI) near Dundee and to jointly promote and market new varieties from the programme.

That work is now well under way with 640 six tuber plots to be grown this year on a site near Forfar. By 2017 there could be top selections available for larger scale trial plots.

Potato breeding is not a rapid process but the Grampian Growers management team – managing director Mark Clark, potato manager David Murdie and general manager Sandy McGowan – know that the rewards are there if the right variety emerges.

Their own variety Gemson emerged from an earlier breeding programme with JHI predecessor, the Scottish Crop Research Institute (SCRI).

Gemson is proving ideal for the baby potato and salad markets, both of which are proving to be resilient sectors in a difficult overall potato market. Out of the annual Grampian Growers seed throughput of between 10,000 and 12,000 tonnes, some 4,500 tonnes is now Gemson for the UK market.

Mark Clark said: “We always thought Gemson would do well but it is currently running at three times our expectations in terms of tonnage and is in the top 20 in the UK.”

Grampian Growers is also heavily committed to the export market to North Africa, Egypt and Israel.

“Our plan is to increase our export activity from around 30% of our business to nearer 50%. While the GPS partnership is well under way it will take time and we could see that Grampian Growers needed varieties that were nearer the market,” said David Murdie.

“I was at the Potato Europe exhibition in 2011 manning our small stand and opposite us was a much larger stand belonging to Dutch seed company AgroPlant. I went over and introduced myself to Joris van der Lee who turned out to be a member of the fourth generation to run this family company. It handles 50,000 tonnes of seed and exports to 50 countries.”

The upshot is that a marketing agreement has been formed which will give Grampian exclusive sales rights in the UK and Ireland. Initially any seed of AgroPlant varieties will be imported from Holland for planting in England and Ireland but stem cuttings will shortly arrive at Scottish Government’s SASA laboratories near Edinburgh for quarantine purposes before being used as the genesis of a micro-tuber multiplication programme.

Sandy McGowan said: “AgroPlant have five main varieties that we are interested in – Messi, Metro, Picobello, Dido and Actrice. We may well find that some of these varieties grow better in Scotland and that we have an export market for them.

“Our partnership with AgroPlant could help us in other ways because they supply Desiree to Algeria and that is a large tonnage market that has been reducing for Scottish seed growers for many years. More than 300 tonnes of Desiree have been supplied to an AgroPlant customer in Algeria.”

There are high hopes that the AgroPlant varieties could be eminently suitable for the UK fish and chip shop and pre-packing markets.

Mr Clark concluded: “I am looking forward to working with AgroPlant and the Van der Lee family. Theirs is a similar type of business to ours and has the same sort of ethos. Our bulb and flower business has been built up around long-term relationships and I am sure this new partnership will run along the same lines.”